Spiritual Symbolism Details in "The Game of Life"

Spiritual symbolism details and the deep significance of each of the chess pieces was often a matter of discussion in the 19th Century.

To say that Retzsch’s “The Chess Players” – with its scene of Satan playing a game of chess for the soul of a young man in the presence of a mournful angel struck a deep chord in his 19th audience would be an understatement. It is difficult to find another painting (or bronze bas relief) more filled with spiritual symbolism detail. And that fact was not lost on those aware of Retzsch’s work.

As early as 1837 an article in The Saturday Magazine, (a British magazine established as a way for the working man to educate himself), provided its readers with analysis of the spiritual symbolism details associated with the chess pieces seen in a Retzsch engraving of the work. For the full text of the article as it was originally printed in that magazine click here. To read the article as posted on line click the "zoom in" button on the right several times.

The sixth paragraph of the article continues:

The seventh paragraph at the top of that same page 170 addresses the spiritual symbolism detail of chess pieces:

Thirty Three years later in 1870 (thirteen years after Retzsch’s death in 1857) an even more thorough analysis and explanation of the  spiritual symbolism detail of each of the chess pieces was offered by C. Borr. Von Miltitz. That analysis and explanation is found on the web site devoted to the writings of Ellen G. White, founder of the Seventh Day Adventist church. To view that explanation by Von Miltitz on-line as well as an introduction by Elder James White, Ellen G. White’s husband, click here. Hit the page advance button > at the bottom of each page to advance the text. White's introduction and the Von Miltitz's explanation can also be viewed on a single page by clicking here.

In paragraph #1 of James White’s introductory remarks he refers to a magazine he saw ten years previously around 1860 in the State of Vermont that purported to show three separate scenes of “The Game of Life”. There is no evidence we could discover on the internet of any scene executed by Retzsch entitled “The Game Lost” or “The Game Won”. Such additional drawings, if they exist, were most likely penned by some other artist for that magazine. The Ellen G. White web site offers no images of the other drawings.  Apparently James White’s plan to present “to the public” those additional images created by another artist never materialized.

Approximately two years later, in the January to June 1872 issue (Volume V) of Our Monthly, a Magazine of Religion and Literature, under the topic heading “Our Miscellany”, there appears at the bottom of page 228 an article entitled “The Game of Life”. That article closely tracks but does not exactly copy the descriptive language of the Von Miltitz explanation. For the web link to page 228 of that magazine click here.

The first sentence of the second paragraph of that article reflects the extent Retzsch and his work were admired:

For a final analysis of the spiritual symbolism details found in Retzsch’s work (so accurately reproduced in bronze by Anthony W. Jones) we turn to the source of the Paul Morphy anecdote found on pages of the Columbia Chess Chronicle for the year 1888.

A submission to the editors of the Chronicle by someone identified only as “Miron” was posted in the December 29, 1888 issue (Volume III, Number 23-26). On page 209 Miron not only offered further support for the Morphy anecdote but also reminded the Chronicle’s readers of the description and symbolism of Retzsch’s chess pieces authored by one William Peet found previously on pages 126 and 127 of the April, 1861 issue of the American magazine Chess Monthly. To view the full Columbia Chess Chronicle article as it was posted by Miron click here.

William Peet’s analysis names the exact same vices and virtues described by Von Miltitz but what is a bit more helpful, because Peet is a chess player, is his willingness to associate each “vice” with a specific chess piece. Von Miltitz and the author of the Our Monthly article were possibly admirers of great art but not necessarily chess players. Whatever the reason, they both fail to associate each named vice with a particular chess piece, preferring to identify all of Satan’s chess pieces that are not pawns (other than the King and Queen) merely as “Officers”.

Not so the chess player William Peet. Indolence is identified as the first of Satan’s Castles described merely as “sitting on an unhewn block of wood, with the head of a Swine”. Satan’s other Castle is Anger described “like a turkey cock”. Satan’s first Bishop is Pride “grave, moving stiffly forward, wearing on his head—which is tossed backwards—a feather crown, one arm insolently thrust into his side, but forgetful while displaying his splendid peacock’s tail how much of what disgraces him he leaves behind him—one hand holds a full purse, the other is stretching out as if giving command”.

His second Bishop is identified as representing Falsehood “a form spotted like a tiger’s, with the head of a cat, the ears laid fawningly back, one hand is placed upon the breast, and the other hides a dagger behind her”. By process of elimination, Satan’s first Knight represents “Avarice and Envy in one form, a bent lean figure gnawing its own hand and pressing a casket under its arm”. Satan’s second Knight is Unbelief, “an impudent horned figure, both hands thrust into its sides and overthrowing the cross with its foot”. Satan’s eight pawns “are Doubts—small, harpy-shaped creatures, with wings like bats and sharp teeth”. 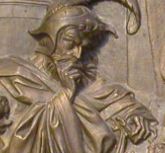 Satan’s King “is himself with a cock’s feather in his hat” and his Queen is Pleasure “a voluptuous female figure with unveiled bosom”. The young man’s King “is his soul, with wings of a butterfly on his shoulders”. His Queen is Religion, “a lofty, majestic figure, with ample pinions, stretching out one hand as giving protection, and holding in the other the sign of expiation”.

The young man’s first Castle is Hope “with her anchor”. His second Castle is Truth “with a lighted torch and a reflecting shield stands with hope as a castle at her side”. The young man’s first Bishop is Peace “with a palm”. His second Bishop is Humility “her head bent in prayer and her person sparingly clad”. His first Knight is Innocence ”a naked child stretching forth its arms confidently to all”. His second Knight is Love “two children embracing each other, while above both rests a single star. The young man’s pawns are “as angels’ heads, winged and worshipping”.

The status of the game is described by Peet similarly to Von Miltitz and the author of the Our Monthly  article. Satan has already taken from the young man “several angels’ heads. Love and Innocence are lost. Humility is gone, and Peace, just seized, is still held in his clawlike fingers”.  The young man has vanquished only anger “and overcome a single Doubt”. The young man’s “assured prospect is that the whole game itself must be lost if religion be sacrificed”.

The lot notes on Christie’s web site for Retzsch's painting sold at auction on October 7, 1999 summarize the dire nature of the young man’s position:

For anyone at that Richmond, Virginia dinner party in the fall of 1861 even slightly familiar with the spiritual symbolism details found in Retzsch’s painting, the chess master Paul Morphy’s ability to take the young man’s board position and win the game certainly created understandable excitement! For that same reason the story of Morphy’s success against the chess position of the figure of Mephistopheles is a story worth repeating again and again today.